Sometimes all it takes is the transition of one year into another to get  enough gumption to tackle all the little procrastinations that have piled up in the fiber bins.  The gruesome task of rummaging through those bins and rounding up unfinished projects is over and I have contemplated the eminent future of each one.    Away go the Christmas decorations of 2015 and out comes the list of all unfinished projects from the past.  This list will dictate what I will be tackling this month as the new year begins. 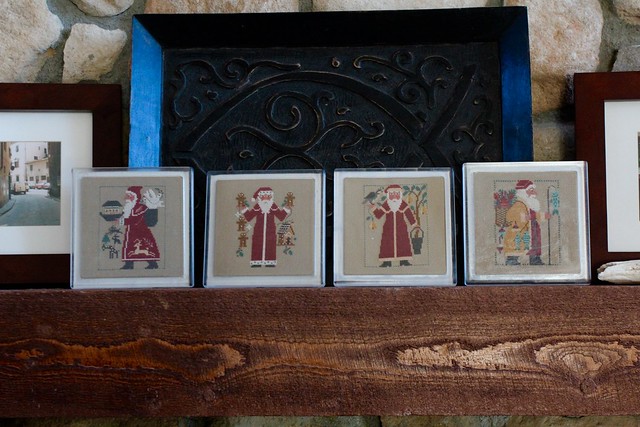 I have a friend who dresses like she stepped out of a time machine stuck in the sixties.  We fondly refer to her as ‘Hippie Shari’ and she wears the craziest things.  Back in October she was at my house working on her third Ojo de Dios Shawl and she left the pattern at my house.  Out of curiosity I pulled out some Noro yarn to knit one of these triangles on the border.  One triangle led to another triangle and before I knew it I had a ‘Shari Made Me Do It’ shawl.  You know where curiosity leads! 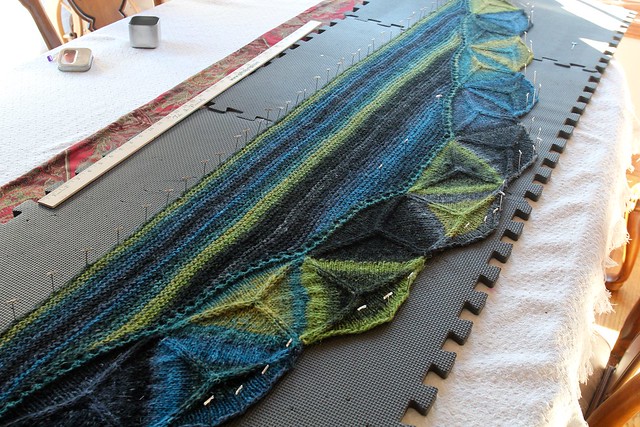 So I have a ‘hippie’ shawl and I guess I’m at a certain age where I’m brave enough to wear whatever I want, after all I grew up in the sixties and came of age in the seventies so I qualify to return to my youth.  Right? 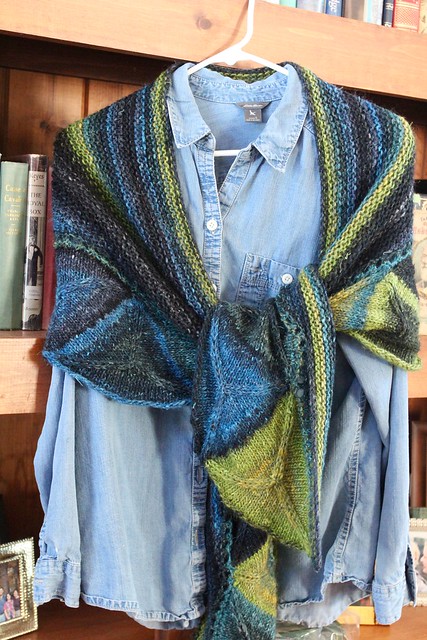 This unique, and possibly absurd, hippie shawl will wrap securely around a denim shirt and I will remember how, once upon a time in the mid-seventies, I embroidered a denim shirt. 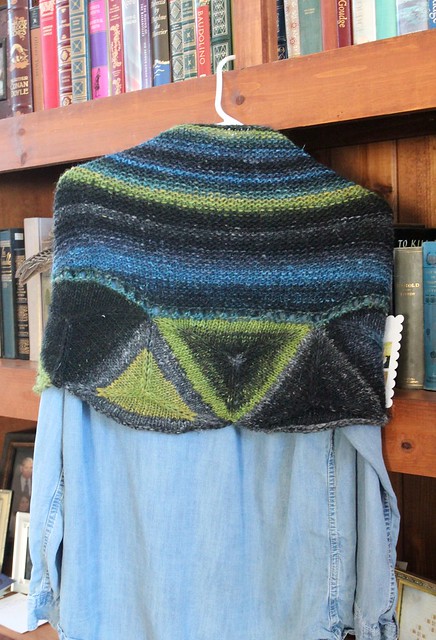 The New Year was ushered in without a hullabaloo.  I was quite sleepy and didn’t even stay up to watch the fireworks launched by the Add-A-Man Club on top of Pikes Peak.  I woke up feeling the enormity of my UFO List and tackled it straightaway…… the scissors were pulled out ….. and …… 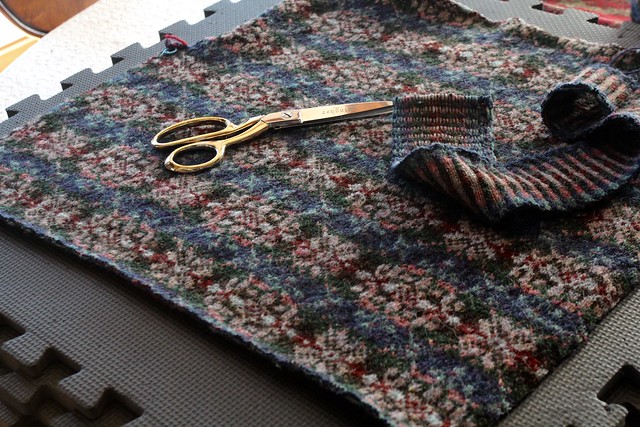 snip…snip…snip… I trimmed my very first fair isle project, a sweater converted to a vest endeavor that never quite made it to completion, to an 18 x 18 square.  This took a lot of courage because I have been cleaving to the idea of finishing it for several years.  I thought long and hard about cutting into this fair isle and finally concluded I would enjoy it more as a pillow. 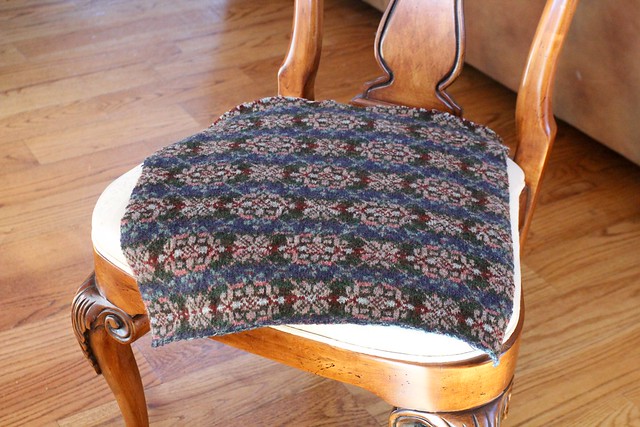 I’ve ordered a down pillow form and crossed of another item on my list as I think how handsome my hubby would be if I knit this pattern again, only this time as a sweater for him.

Having originally thought I would knit a Fair Isle Scarf for the Conceptual Knitters Sky project, I made a little detour and landed on a Fair Isle Sampler Hat instead. A hat seems to be the perfect palette to experiment with color combinations and Fair Isle patterns. And speaking of ‘palette’, I ordered a big box of Knit Picks Palette using my first two sunrise photographs to help me pick colors.

Mary Jane Mucklestone designed a Fair Isle Sampler Hat in 2004 and it was featured in in one of my first bought Interweave Knits magazines. I am going to use her pattern instructions and her numbers to knit the hat but all the fair isle motifs will be replaced with ones from her recent book, 200 Fair Isle Motifs.  The hat is 22-inches long.

This week I explored color combinations using my “limited” palette of fourteen colors. The corrugated ribbing was knit using the colors of my first sunrise. The first motif represents the second photograph. I can already see the difficulty in replicating a sunrise but the colors are fun and I guess the whole idea behind “conceptual knitting” is just using the colors in some creative way. I had fun and that is what counts most, right?

I picked Motif 200 to represent my May sunrise. It has 19 rows and 24 stitches but I added an additional neutral row to set it off from the next sunrise which will be knit next month.

I am using my favorite Productivity App (scroll through) to help break hyper focusing .. trying to bring all my craft loves into balance.
It is Friday Night at Hawk Run Hollow. The Jacob’s Grist Mill block is my favorite and I’m savoring every stitch.
Tudor Thursday. Spending some time with Jane Jackson tonight. This border? It’s amazing..
Oh my, happy mail! I am being initiated into the world of Lori Holt @beelori1 . I can’t wait to start these two quilts and hope I have them finished by mid June when I move into our house. 🐝 🌺 🐝 ❤️
Progress on the Reverend Gourdon Squashbottom, week one. This will be my Wednesday stitch with @yvettego @pumpkinhollowquilts @crosshatchquilts .
Starting ‘The Reverend Gourdon Squashbottom’ tonight with @pumpkinhollowquilts @yvettego and @crosshatchquilts .
Follow Socks-for-Mum on WordPress.com