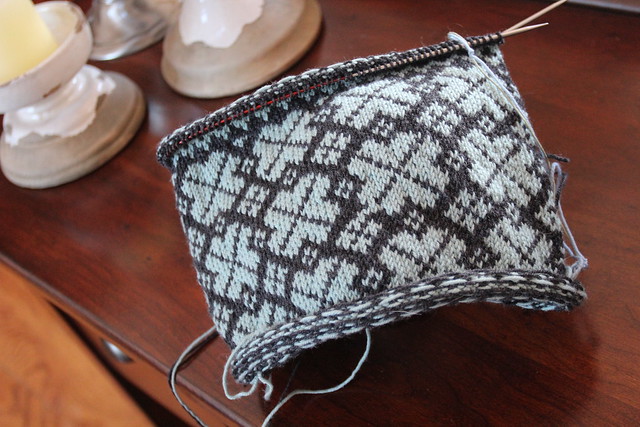 Ambiguous Cowl is measuring 11″ across for a 22″ circumference so I believe my gauge is spot on despite all my worries in the Clue 1 post.

The pattern is reminiscent of traditional Scandinavian designs and put my chart reading and stranding skills to work.  I don’t shy away from charts, I guess because of my many decades of counted cross stitch but I can respect the fact that some knitters steer clear of them.

Each repeat in this pattern is made of 16 stitches and 16 rows.  The designer gave us a couple tips that I also have found helpful through the years.  She recommend placing a marker every 16 sts to help you stay on track with the chart.  She also recommended using a sticky note (I use the extra sticky ones) on the chart to keep your eyes from wandering to the wrong row.  It is best to put the note above the row you are working and have it covering the rows not yet worked thus allowing you to see the charted design as it appears on your needles.

There were some special considerations that were addressed in the stranded design and this was where I learned I needed to have a ‘teachable’ spirit.  There were some long stretches between color changes in a few places and that can make the strand (or float) on the back long and untidy.  The floats can snag easily and pucker the fabric. Do you remember as I do, ever putting on a sweater in your childhood and your finger getting caught in a float?  As you knit the design there is a way to ‘catch’ the floats in those long stretches and trap them.  The designer said the general rule was to catch the float if the yarn is unused for more than 5 stitches or one inch.  Well….I like things ‘tidy’ on the backside of my stranded knitting so for years I have caught the floats on every fourth stitch, regardless.

Halfway through the cowl I realized I was gobbling up yardage, far more than what the designer had used, and I had to take a deep breath and let go of my ‘regardless rule’.  When I did I discovered that the pattern lay flatter and actually looked nicer.  Never, before this project, did I consider that my method for catching floats used more yarn than necessary but with us watching yardage in this project as we were doing…… I learned something new, YAY!

It is Friday Night at Hawk Run Hollow. The Jacob’s Grist Mill block is my favorite and I’m savoring every stitch.
Tudor Thursday. Spending some time with Jane Jackson tonight. This border? It’s amazing..
Oh my, happy mail! I am being initiated into the world of Lori Holt @beelori1 . I can’t wait to start these two quilts and hope I have them finished by mid June when I move into our house. 🐝 🌺 🐝 ❤️
Progress on the Reverend Gourdon Squashbottom, week one. This will be my Wednesday stitch with @yvettego @pumpkinhollowquilts @crosshatchquilts .
Starting ‘The Reverend Gourdon Squashbottom’ tonight with @pumpkinhollowquilts @yvettego and @crosshatchquilts .
Someone is all comfy and nestled in while Mum works on thread keeps.
Follow Socks-for-Mum on WordPress.com